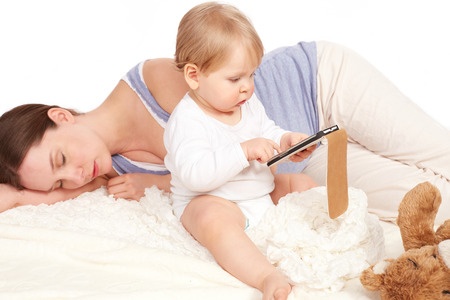 Naps – the how, why and what of day sleeps!

Written by Jen Staniforth on November 6, 2015. Posted in Naps

When babies are born, they have a bit of “getting used to the world happening” to do. Sleep is erratic and comes in a combination of short and long stints day and night; my very short, swift advice for you with a newborn is to expect next to nothing for some sleeps and something more than that for others!

In my experience, babies tend to start looking like they have a pattern to their sleep around weeks 2-4. Generally, once you’ve picked up the pattern, they’ll b close to changing again because at 6 weeks they “wake up” a little more and become more aware of the world around them. This affects sleep. Mostly, it’ll change the baby’s ability to get off to sleep because, well, they’re often too “busy” to sleep!

Swiftly following this stage (don’t blink or you’ll miss it) seems to be the lengthening of naps stage. I tend to see babies who experience less intervention at the “getting-to-sleep” time having the ability to lengthen their naps to a good amount of say 1.5-2 hours, and have at least two of these with an extra catnap at the end of the day on most days.

Then the 4 month regression hits. And it’s not easy for a lot of parents (and babies!). All of a sudden, your baby may decide that 45 minutes (or less) is enough to recharge… the fact is that sometimes it’s not enough to recharge, so if your baby is taking catnaps and you are unable to extend the nap in any way then ensure he’s not awake too long afterwards before you go for his next nap. Some babies hop through the day doing these catnaps, and subsequently take 4 or 5 one-cycle sleeps. If this is where you’re at, don’t despair. Once the developmental swing slows, things should change.

Sometime in between 4 to 6 months, babies should begin extending their naps from one cycle to closer to at least two cycles (i.e. from 30-45 minutes to 90 + minutes). Typically, it’s the first nap that extends first. Then you’ll likely see his next nap lengthen and you’ll be left with him needing only a short nap (like 30 minutes or so) at the end of the day.

Babies usually drop down from three naps to two naps per day around 8-9 months. You will notice your baby refusing the end-of-day catnap when he begins the transition. If you allow him to “take the lead” on whether it is a 3 or 2 nap day, it’ll probably go smoother. When your baby is having a 2 nap day remember that he’ll need an earlier bedtime (e.g. 630pm) to prevent him from getting over-tired; if he takes the catnap in the late afternoon then you can go for the slightly later bedtime (e.g. 7/730pm).

Once your baby has done “2 nap days” for a good few weeks you can be assured he’s no longer in need of 3 naps. If the morning nap shortens to become a catnap (e.g. 30-45 mins) at around 10-12 months and stays at 930am, it will allow your child to “make it through” the morning to a longer afternoon nap at around 130pm. This will prevent him from taking too much nap sleep in the morning and subsequently refusing the afternoon nap when he still really needs two sleeps. I see this often; it tends to make for a very over-tired baby at bedtime when he has been awake from 11am until 630/7pm!

Babies usually need 2 naps until an average age of 14 months, but sometimes as late as 18 months (this is also dependent on how much night sleep they are getting). Around this age, you will begin to see signs of transition. This will look like him refusing the catnap in the morning. When this happens, move to a “1 nap day” and schedule the nap at 1130am/12pm, then an earlier night bedtime (e.g. 630pm) to help him not become too over-tired. As he transitions (typically over a few weeks) allow him to decide if it will be a 2 or 1 nap day by trying the catnap and going from there. Again, once a few weeks of “1 nap days” have occurred you’ll know he’s no longer in need of 2 naps.

From this point, the 1130am/12pm nap gets pushed back later and later in the day. You’ll see a readiness for this as sleep slides later even though baby is in bed. The nap ends up being at around 130pm, and once you get to a 1 nap schedule at this time you’ll know that he’s getting ready to drop the nap altogether.

Remember that when your child drops this one nap (usually between 2.5-3.5 yrs), it’s healthy for rest time to occur. Instead of expecting sleep, facilitate a “quiet time” every day during which he gets a container of books and quiet toys of his choice to take to bed. He then stays there for approximately 30 minutes to 1 hour. If he falls asleep during this rest time, you may need to cap the nap at 230/3pm to protect going to bed in the evening at 7/730pm. At this stage, bedtime will need to be adjusted according to what has occurred after lunchtime.

Naps. They’re not easy! Do what you can and remember the purpose of a good nap: to restore, at regular intervals through the day to prevent over-tiredness and to help your child grow and develop well.